How to get from Heathrow Airport to Gatwick Aiport


Flights booked, luggage checked, keys, tickets, all checked. And then you remember : your flight is coming into Heathrow and out of Gatwick. The next logical questions that pops into your mind is : “How am I going to get from one to the other.”
No worries, we have you covered. You can have your pick between bus, train & taxi.

The most popular and direct choice is with the National Express coach to Gatwick. The service runs around-the-clock, up to six times an hour. Journey time is aproximatly 75 minutes and it costs £25 one way or if you book online it only costs £20 one way and £40 return.

Let us take you step by step :

The walk from Terminals 2 or 3 to the bus station takes about 10 minutes. Its luggage trolley friendly and is mostly along moving walkways and lifts. Its also underground so need to worry about the weather.

You can travel free from Terminal 4 to the Central Bus station by Heathrow Express train which runs every 15 minutes. 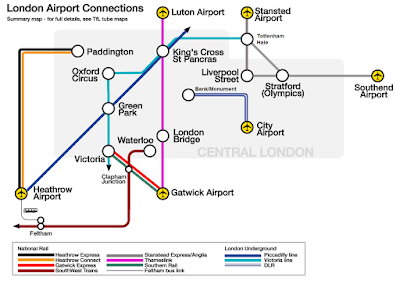 Unfortunately, there is no direct rail service between Heathrow to Gatwick.  You must go via central London as follows: train ( Heathrow Express)- tube or taxi - then train ( Gatwick Express/First Capital Connect).
The fastest rail route is as follows:

It takes approximatley 5 to 10 minutes depending on terminal to arrive at the rail station.

From Paddington you go to Farringdon by Circle Line (it takes 16 minutes, but allow 7 minutes for the interchange) - £4.30

From Farringdon you get to Gatwick by First Capital Connect (41 minutes, allow another 5 minutes for the interchange) - £9.90

Total cost: £33.20, travel time at least 1 hour 40 minutes if connections are instant with no waiting for trains to arrive. Sometimes this journey can be significantly longer.

Book a private-hire car to take you between Heathrow and almost anywhere in mainland Britain. Alternatively, hail a classic London black taxi from the rank outside the terminal.

With Minicabit the estimated time is 50 minutes and the cost between Heathrow Airport  and Gatwick is £56.

London's famous black taxis stop at the ranks outside each Heathrow terminal. Drivers are fully licensed and have passed the Knowledge of London examination. All taxis operating at Heathrow have wheelchair access and take credit cards. The cost will likely exceed £100 and you could find a longer wait for one at peak times.

Now if you need to get the other way around, you can take the National Express 707 line towards Northampton. Get off at the Heathrow Airport London station ( wich is near Terminal 5). At Gatwick the National Express bus visits both North and South Terminals. For boarding and drops the coach bays are well signed and are directly in front of the passenger terminals, a few yards out of the door.

From the airport take the Gatwick Express towards London Victoria, get off at the Victoria Station, hop onto Paddington line, get off at Paddington Station, take the Heathrow Express to the terminals. Gatwick Express trains run non-stop between London Victoria and Gatwick Airport. The journey takes 30 minutes and a standard-class single costs £17.70.To make the link with Heathrow your options include: Heathrow Express between Heathrow and London Paddington, Underground between Paddington and Victoria (45min, £27). London Underground between Victoria and Heathrow (50min, £4.80).

Black Taxi cabs can only pick up at Gatwick if they are there for an advance booking. There are other Licensed taxi services available from Gatwick, though. If you have not prebooked, go to the Airport information desk for assistance. Fares vary depending on number of passengers, amount of luggage and time of day.Can be slightly cheaper than London Black Taxis but not by much.
Remember to allow yourself plenty of time! Besides the journey times quoted here you’ll need to take into consideration things like passport control, baggage reclaim, waiting for buses, check-in, airport security and maybe taking a coffee break.